Ha! At least that is what the tag shows. For a several years now I have been getting calls and emails concerning the elusive ‘Infinity Instruments’ brand out there. I had personally never seen one nor met anyone else who had come across one.

Oddly enough, I found an ‘Infinity Instruments’ octave mandolin on ebay recently. I went ahead and placed my bid on this one day auction and won. The instrument was auctioned by Howard Yearwood. Howard had used this instrument in some session work.

(Howard has been a Bluegrass, rock and country guitarist. He is now doing session work in Nashville. Sometime this month Howard will begin lessons on the B-bender Tele via Skype.   Check out ‘Whistlestop‘ on Howard’s reverbnation page.)

Anyway, he got the instrument shipped promptly and I received it in this box. 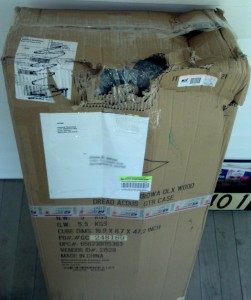 Once I saw the condition of the box, I was worried that the neck or headstock would be broke but it turned out fine.

And here it is… the ‘Infinity’ tag. 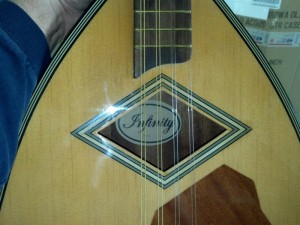 I thought for sure that the tag might have some information as to who is building them, but no. I have looked for these folks online but found nothing but more questions. My guess is that they are produced in a Pacific rim country and are tagged infinity or some other name depending on where they go.

If you have more info, let me know…

BTW… for a plywood top instrument and after a good setup, it sounds and plays pretty good.

This entry was posted in News and tagged Bouzouki, mandolin, Octave Mandoolin, The other 'Infinity Instruments'. Bookmark the permalink.