You probably know neither the secret password nor handshake, but, I am going to blow the guild wide open and give you a summary of the GAL convention.

The Guild of American Luthiers (GAL) held its convention in Tacoma, Washington on the Pacific Lutheran University campus near the end of July. Over 400 luthiers, most from North America, attended the week-long celebration of building and repairing stringed instruments.

I left the 115 degree heat indexed Central Illinois area for the moderate temperatures of the Seattle area. Here is the high altitude gateway to Tacoma/Seattle, Mt. Rainier, from the emergency exit row window. 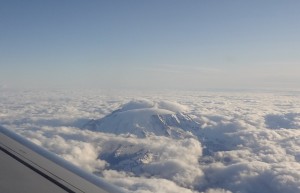 It was cloudy on my travel day and evening. I attended a luthier’s gathering in Seattle at Rick Davis and Cat Fox’s shop where he builds his Running Dog guitars and Cat runs the Sound Guitar Repair center.  There I met several luthiers and the Stewart-MacDonald gang.  Rick and Cat’s hospitality was above and beyond. The rest of the week’s weather was nearly perfect; 70′s – 80′s and clear blue skies. Here is a shot of the dormitory I called home for my stay during the conference. 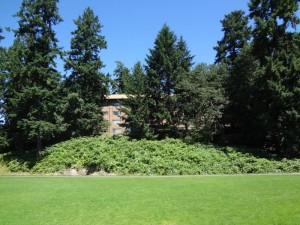 While I would have enjoyed attending each, I chose John Greven’s workshop. He had plenty going on in his shop at once. I attribute much of his speed to repetition and multitasking. Here is a picture of Greven’s shop… which is currently about three times larger than my current space.

Below is a swiped photo of Erick Coleman and Evan Gluck during their workshop. 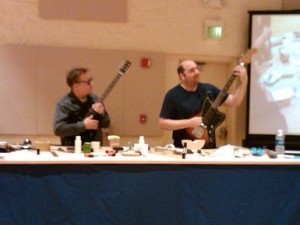 That evening we were treated to a unique concert in the stunning Lagerquist Concert Hall featuring James and Karen Buckland (19th-century guitar and piano) followed by the Daneshvar Ensemble, a family group featuring traditional Persian music and instruments.

Thursday morning Richard Brune gave a lecture title: ‘Lutherie: Yesterday, Today and Tomorrow‘. Here he is talking about the past. 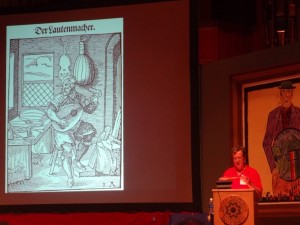 His most eyebrow raising comments were on our future with CITES and the LACEY Act. Keep all of your receipts! Anyway… in the near future if you cannot prove where you acquired your materials you might be in trouble. The Lacey Act as it is currently written is enforced by several over-lapping government agencies and they all have a slightly different interpretation of the rules. So, yes, more government regulation even hits small-time luthiers. You can read more about the CITES and the Lacey Act here. If you haven’t already, consider joining GAL.

In the future, look for a luthier who is certified by GreenerLuthier.com. This site, once complete and active, will track all of the plant and animal material on an instrument and place it under one serial number. This will allow customers, luthiers and even government thugs to quickly pull up all information about a specific instruments, what materials were used, where did they originate, photos, receipts, etc.. Hopefully this will help in border crossings, shipping overseas and even shipping from one state to another (no joke). An additional benefit will be the quickly accessible ‘stolen’ list, available to pawn brokers, instrument stores and everyone else. 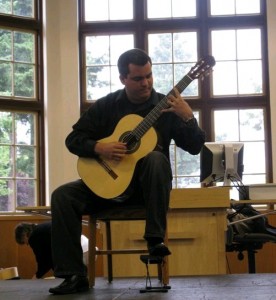 Edel was also scheduled to be play at the Friday night concert. The concurrent workshop was by Stephen Marchione, ‘Rethinking the Semihollow Electric Guitar‘.

Again, I would have loved to attend all three but went to the workshop by Don MacRostie and Gary Magliari.  Earlier in the week I had been talking with Don at the gathering at Rick Davis’ shop. Don introduced me to Gary Magliari and told me a bit about the work Gary had been doing with refining the intonation on stringed instruments. This intrigued me and as it turns out, Gary has done it. Through several years of research, trial and error he has improved the intonation of stringed instruments. I keep trying to build instruments here but am held by several other pending projects, but, one of the next mandolins I build will have the ‘special compensation’. I do expect this new intonation to become mainstream in the near future and musicians who do a lot of recording will be the first to benefit. Here is Gary during part of his presentation. 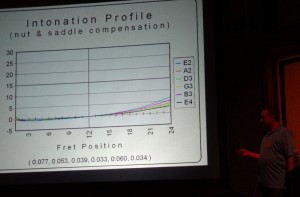 From 3 – 6 p.m. luthiers and suppliers were able to exhibit their instruments and supplies in two different halls. Wow, there was a lot of wonderful instruments, materials, tools and more!!! I came away light handed… spruce is light. I picked up a set of Alaska Specialty Woods – Tranquil Point Bearclaw Sitka. I saw these sets on their website but the pictures do not do it justice. This wood is, holy cow! I also got a demonstration of Chris’, at LuthierTools/CNC Linear, CNC machine. He made me a telecaster air guitar while I was there and pretty much convinced me that one of his machines is in my future. This tool will work nicely in the new building… but that’s another day.

Before leaving home I had been leveling and polishing the frets on the dreadnought I was taking. Unfortunately I forgot the bridge pins on the bench! It is hard to believe, but, there was not a single set of bridge pins available at this convention. Ok… there was one set. Chuck Ericson (The Duke of Pearl) had a set of fossilized walrus ivory pins and they were expensive. Here is some of his woolly mammoth ivory. 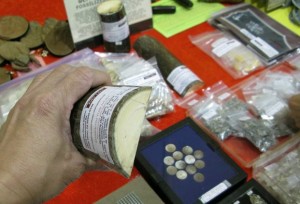 I decided not to buy the bridge pins and instead chose to make some from scratch. James Condino provided a spare piece of mojo-laden Adirondack spruce. It was some of the spruce harvested by Ted Davis and even had Ted’s signature…  at least that is what I’m going with. I went back to the dorm and whittled away that little block until I had useable bridge pins. Here is my trusty multi-tool and the mess I created. 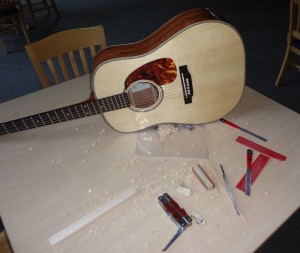 Friday morning began with K. Carlos Everett’s lecture: ‘Guitar Workshop Evolution: One Luthier’s Journey‘, followed by a group photo. See if you can find your favorite luthiers in the photo. 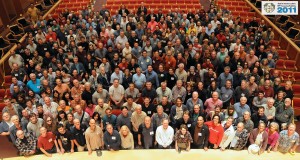 Later in the morning came James Ham’s, ‘Ultralight Cello and Other Heresies‘, and the steel string listening session moderated by Mike Doolin. I attended the steel string listening session and presented my latest dreadnought for consideration. Mark Hanson played several guitars finger style. Below is a photo of Mark playing as well as a smart phone video taken by Robert Carbonara, a luthier from Santa Barbara. The video is a bit grainy, but the audio worked out pretty well. The guitar is a dreadnought with Adirondack spruce top and bracing, Honduras Rosewood back and sides, African blackwood bridge, Macassar ebony and Honduras mahogany neck. By the way… that is an Infinity Guitar. 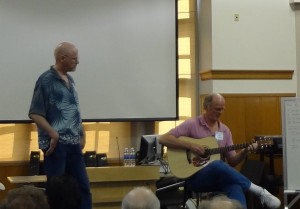 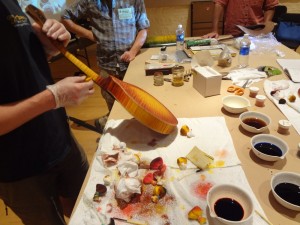 The end of the afternoon was reserved for the vendors and luthiers exhibition for registered participants only.

Another event for the day, although unscheduled, was a ukulele listening session where Kimo Hussy, a renowned Hawaiian ukulele player and teacher, played the ukuleles and wowed the audience. Kimo Hussey via. Kathy Matsushita, thanks Kathy. You can read her blog here.

The evening nearly ended with the Edel Munoz concert at Lagerquist Concert Hall. Following the concert, a steel string open mic was held at the Northern Pacific Coffee house down the street. They ran out of beer.

Saturday started with an 8:30 a.m. panel discussion with David Cohen, Don MacRostie, and Lawrence Smart, on ‘The Mandolin Family: Traditional and Contemporary Perspectives’… at least that is what I was told. Following that discussion was a workshop given by Charles Fox on “Production Techniques for the Custom Luthier.” Charles brought in a lot of jigs and described their use. It was quite at odds with Greven’s workshop earlier in the week. Here is a collage of some of the jigs Charles’ brought for explanation. 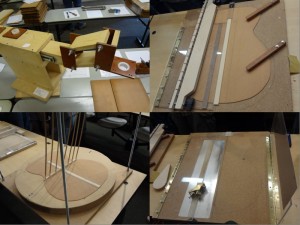 Lunch was served followed by the final exhibition of luthiers’ and suppliers’ products, this time open to the public. Did you take part in Allan Corruth’s experiment on sound holes?? I can’t wait to read the full results of his testing. 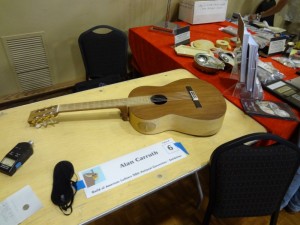 At 2:30 p.m., the sale of silent auction items (lutherie items donated by individuals, all for the benefit of the Guild).

Then, one of the highlights of the convention, at 8 :00 p.m., the Guild Benefit Auction, an entertaining time for all.

Uhh… what in the world??

If you can guess what it is correctly you get a prize… much like the item pictured.

The next morning I got some breakfast and a few pics of some new friends. Here is Robert Carbonara of Carbonara Guitars – Santa Barbara, CA, me, and Dean Story of MountainHeart Guitars – Snellville, GA representing the West, Midwest and East. 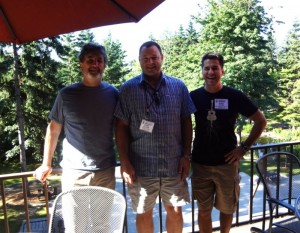 During the week, ‘The News Tribune’, a Tacoma news agency, found a little time to publish a short article on the convention.

I have to say that the convention was an eye-opening experience. I learned a lot, helped out a bit and found that my attention has not gone without reward. Next stop… Alaska, then IBMA.

This entry was posted in Audio, News, Video and tagged GAL, Guild of American Luthiers. Bookmark the permalink.